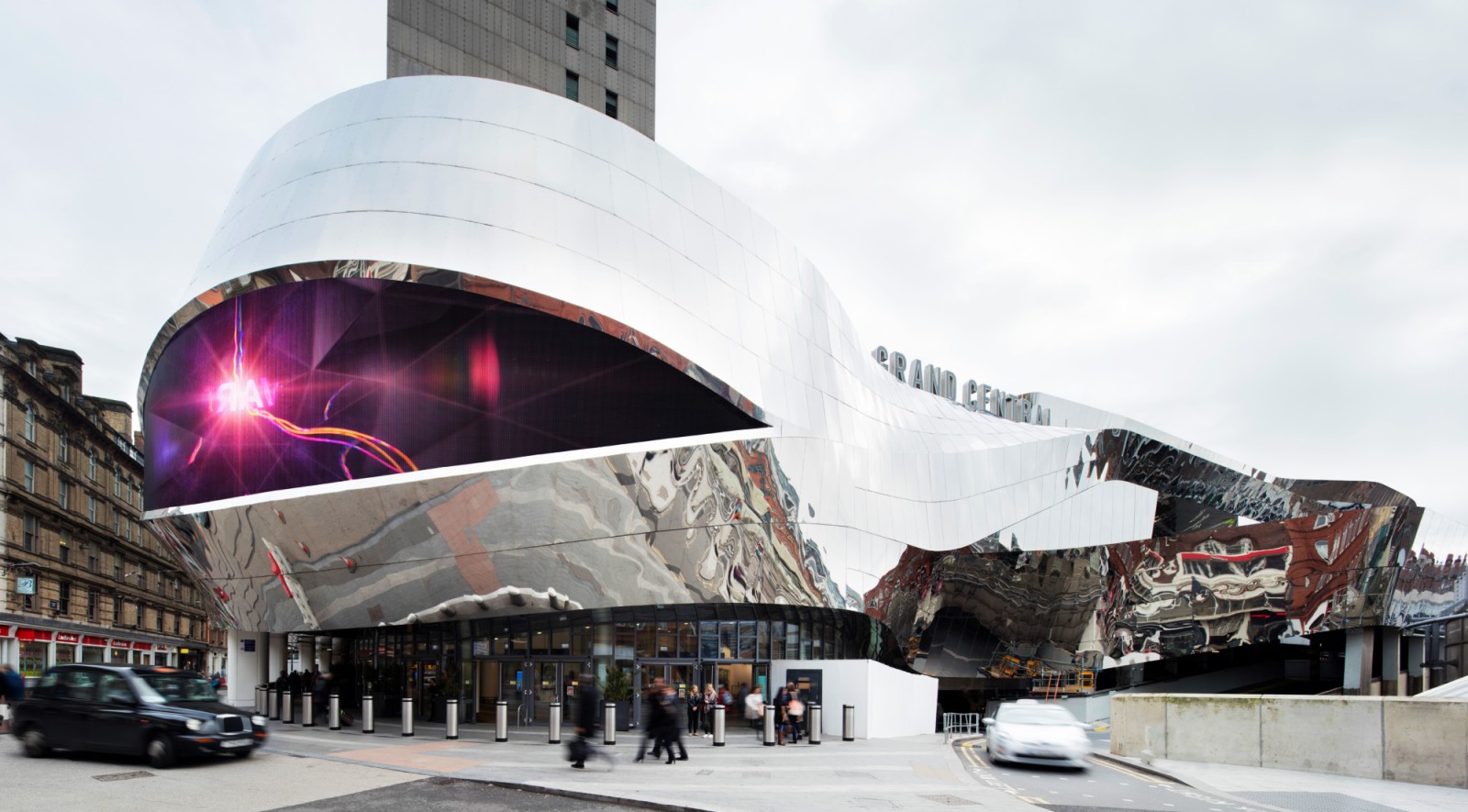 The project commissioned by Network Rail, was the first of its kind for the UK’s ‘out-of-home’ advertising market to incorporate curved large format LED display solutions.  New Street Station was the first in the UK to feature state-of-the art curved elliptical advertising displays at each of its three main entrances.

Due to the innovative and iconic requirements of the product, this created non standard procurement and contract requirements.

Concept Sign and Display Group, which operates the European and Middle East arm of Californian-based technology company D3, designed and manufactured a bespoke solution for the New Street project.  It has developed a pioneering system to create three seamless digital eye-shaped curvatures, spanning up to 30 metres by 6 metres.

The North West eye, which is situated at the station entrance adjacent to the High Street, also incorporates a highly innovative solution which enables natural light to filter through into the station concourse behind the screen.  The custom surface mount diode mesh solution is a transparent product designed and manufactured specifically for this element of the project.

The project has delivered all three Iconic high resolution Media Eyes on time with a unique profit share structure that resulted in a self-funding installation for the Client team.

All three media eyes are now used to display advertising messages as well as public information.  As part of its project brief, the supplier developed a robust, technologically-advanced control system, capable of driving many pixels over a wide area, to ensure the media eyes operate efficiently.

David Neale, director for Concept Sign and Display Group, explained the significance of its latest installation: “The media eyes at New Street represents our biggest contract win to-date and, following a rigorous tender process, the team was thrilled to bring together its technical expertise, innovative approach and architectural experience on such a high profile project.

“Through the delivery of the media eyes we have also showcased how effectively the team can translate a technologically-advanced concept into a highly practical, ‘buildable’ solution with true commercial viability.”

Sean Morrough, managing director for Concept Sign and Display Group, added: “As a Birmingham-based business we are all incredibly proud to have had the opportunity to play a part in such a major project for the city, and it is exciting to be on site delivering a lasting legacy in the form of three curved advertising displays.  It is hoped these architecturally-designed display systems will be vital assets for the city and its stakeholders for many years to come.”

Azhar Quaiyoom, of Q Sustain Ltd representing Network Rail project Engineering, said: “The team supported by Q Sustain has demonstrated a highly effective approach throughout the media eyes project – from the team’s response to the brief and its ability to meet the multiple requirements of the tender process, to the attention to detail shown during fabrication of the media eyes.

The sheer scale and the complex geometry of the media eye LED displays makes them the most innovative example on a Network Rail station. Q Sustain led the way for a unique and unprecedented procurement process for such a unique and technically complicated challenge, providing three iconic screens never seen at a train station before.

How can we help you?

Contact us at the Qsustain office or submit a business inquiry online.

This website uses cookies to improve your experience while you navigate through the website. Out of these, the cookies that are categorized as necessary are stored on your browser as they are essential for the working of basic functionalities of the website. We also use third-party cookies that help us analyze and understand how you use this website. These cookies will be stored in your browser only with your consent. You also have the option to opt-out of these cookies. But opting out of some of these cookies may affect your browsing experience.
Necessary Always Enabled

Any cookies that may not be particularly necessary for the website to function and is used specifically to collect user personal data via analytics, ads, other embedded contents are termed as non-necessary cookies. It is mandatory to procure user consent prior to running these cookies on your website.