New Street Station, a central transport hub hadn't seen any changes since the 1960s. It was our task along with our partners to bring this key transport facility into the new era.

The Challenge of £600 million renovation of the Birmingham New Street station that has long been neglected and was due a much needed revamp. Qsustain utilised innovative solution to reduce the carbon footprint and use the latest technologies.

How to turn Birmingham New Street station: a dark, unwelcoming and overcrowded hub with poor access for passengers, into a light bright welcoming space.

The environmental challenge – how to convert a very dated and energy intensive systems of heating, cooling and ventilation which were poorly  maintained and controlled then convert into a modern, green, sustainable development while adhering to stringent rail standards.

Network Rail’s £650m New Street station redevelopment is now over three times the size of the old station and has 31 new escalators and 29 new lifts. To cater for future demand and create a better passenger experience for all, more energy is required and Q Sustain tirelessly explored all avenues to achieve a sustainable development and legacy by implementing best practice and beyond.

These initiatives at New Street have set a new benchmark in Network Rail of how to adapt and create innovative sustainable solutions in complex rail environments that include an 80m long green wall, rainwater harvesting systems, predicted to supply 60% of toilet flushing demand from recovered rainwater, and LED Lighting with close control.

Over 12,500 tons of concrete was removed from a disused car park and the roof.  All the waste concrete removed from the site was taken to a waste recycling facility for use on other projects and avoid waste to landfill.

The station is the first to install a Combined Heat and Power (CHP) plant and led the way to significantly expand a city district heating network with modelled reduction of 3,000Tons carbon / year. Such a scheme shall reduce the cities carbon emissions and assist neighbouring businesses and developments with the option for a greener fuel source, creating a carbon smart and energy wise station.

Energy and a Carbon Smart Station

Land Use and Ecology 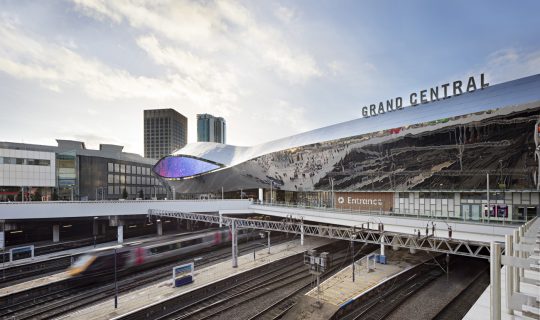 How can we help you?

Contact us at the Qsustain office or submit a business inquiry online.

The detail of the report was excellent to see and much appreciated by everyone who read it. This is far above reports of a similar nature that we have had in the past from other providers. It was also greatly appreciated that the team were willing to do more than one site visit to ensure as much information could be gathered to inform the report.

This website uses cookies to improve your experience while you navigate through the website. Out of these, the cookies that are categorized as necessary are stored on your browser as they are essential for the working of basic functionalities of the website. We also use third-party cookies that help us analyze and understand how you use this website. These cookies will be stored in your browser only with your consent. You also have the option to opt-out of these cookies. But opting out of some of these cookies may affect your browsing experience.
Necessary Always Enabled
Necessary cookies are absolutely essential for the website to function properly. This category only includes cookies that ensures basic functionalities and security features of the website. These cookies do not store any personal information.
Non-necessary
Any cookies that may not be particularly necessary for the website to function and is used specifically to collect user personal data via analytics, ads, other embedded contents are termed as non-necessary cookies. It is mandatory to procure user consent prior to running these cookies on your website.
SAVE & ACCEPT